This ABC Wednesdays letter T is for travel. Now it's time to write a bit about our way to do it. And you can get an idea where all this photos come from.
The blue route was from our circumnavigation (westbound) in a thiny sailboat with my husband and our son. The biggest wilderness are the Oceans. 2000 to 2003.
The red route is eastbound, two years (2008 to 2010), with my husband and two kids, mainly on land.

Here you find all the countries I've traveled

In no order, and not complete, my travel tips:

Bikes in the city 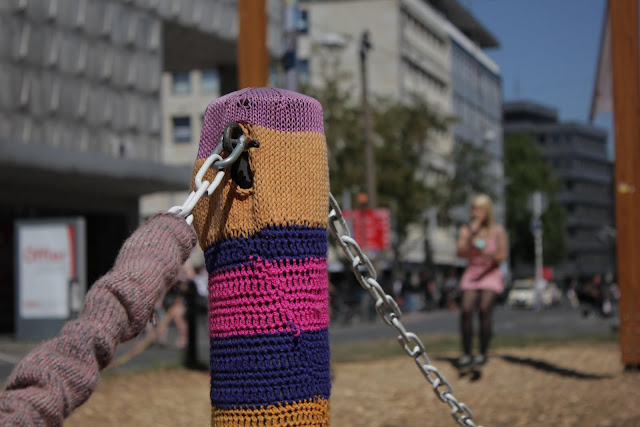 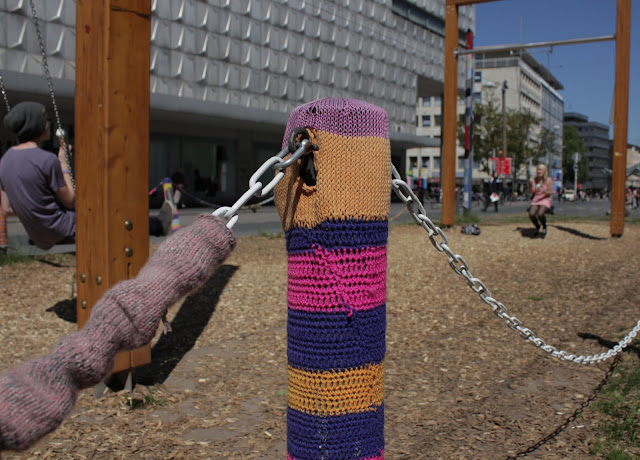 Before the track for the tram, now a new pedestrian area right in Dortmund city. This couple is enjoying their icecream on the huge swings.

All the bollards are decorated with crochet or knitting, but I have no idea what this project was about.
posted by Carola at 9:40 PM 5 Comments

Email ThisBlogThis!Share to TwitterShare to FacebookShare to Pinterest
Tags: Dortmund, what's that? 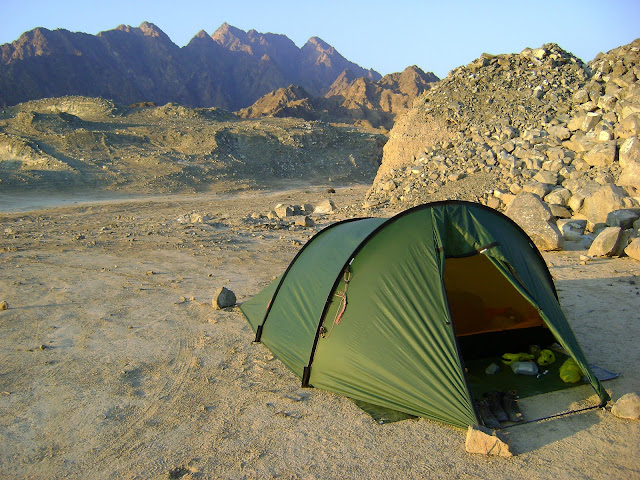 We slept there in our tent. Wonderful. And we had some great walks around. On our video (at 4:20 minutes) (in German) you may watch a bit from this place.

And no, no water, no swimming.
This is my ABC Wednesday, S is for Swimming and for Sign, Sand and Stone.

Everywhere in Wuppertal you may find these penguin sculptures. In 2006 the Zoo Wuppertal turned 125 years and they had an event called Pinguinale.

In many cities there are simular animal sculptures, for example Dortmund has designed rhinocerosses. Does your city have something like that?
posted by Carola at 3:45 PM 2 Comments

Kinderwagengarage - or park them inside

A baby carriage garage from the childrens doctors practice.
Linked to Mellow Yellow Monday
posted by Carola at 8:52 PM 7 Comments


We came here while traveling by canoe on the Rhine.
From Wikipedia:
The Three Countries Bridge (German: Dreiländerbrücke, French: La passerelle des Trois Pays) is an arch bridge which crosses the Rhine between the commune of Huningue (France) and Weil am Rhein (Germany). It is the world's longest single-span bridge dedicated exclusively to carrying pedestrians and cyclists.

Its name comes from the bridge's location between France, Germany and Switzerland (the latter being located approximately 200 metres away).
The construction of the bridge required 1012 tonnes of steel, 1798 cubic metres of concrete, and 805 metres of cables of 30 and 60 centimetres in diameter.
The bridge was assembled nearby in Huningue, then transported on 26 November 2006 to its current site on the Rhine. The bridge became open to the public on 30 March 2007, and was officially inaugurated on the night of 30 June-1 July 2007.

Linked to Shadow Shot Sunday and to Sunday Bridges
posted by Carola at 10:47 PM 10 Comments

﻿ ﻿
In the reflections you see the Dubai Creek.

Linked to Weekend reflections
posted by Carola at 9:57 PM 5 Comments 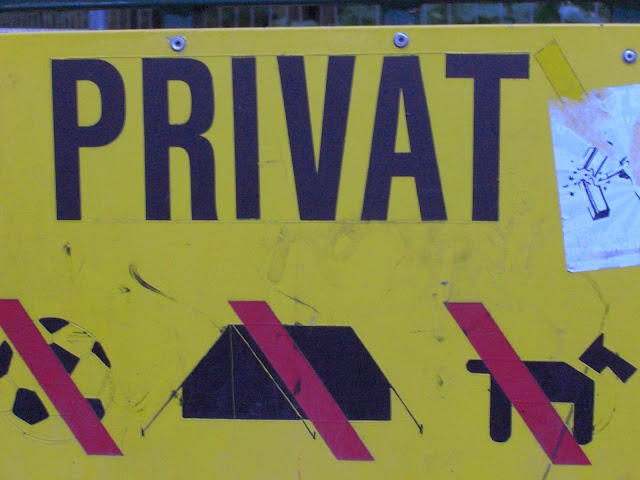 
This is my ABC Wednesday, todays letter R is for rainforest.
posted by Carola at 10:10 PM 5 Comments

The quote is from Henry Wadsworth Longfellow.
posted by Carola at 9:56 PM 3 Comments

U in black and yellow 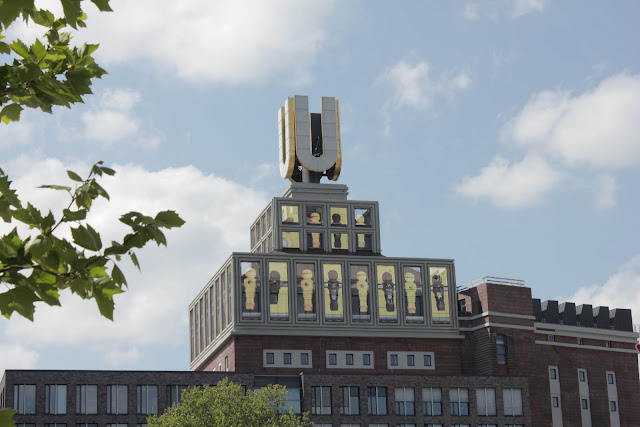 Everything in Dortmund is black and yellow these days. The soccer club Borussia Dortmund is the best club in the Fußball-Bundesliga and Deutscher Meister.
More about the Dortmunder U on this post﻿
Linked to Mellow Yellow Monday
posted by Carola at 9:50 PM 1 Comments

Email ThisBlogThis!Share to TwitterShare to FacebookShare to Pinterest
Tags: color, Dortmund, U 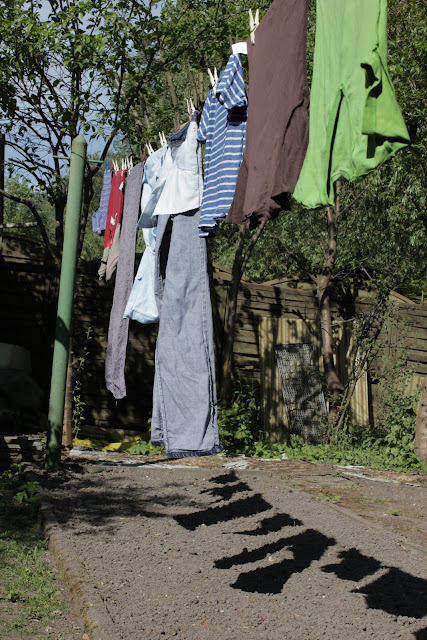 The chapel is part of the Kulturforum and music school Waltrop. Waltrop is a small town close to Dortmund and Lünen. The crane is from the construction site at the neighbouring hospital.

Here you find more Weekend reflections . Thanks James for hosting.
posted by Carola at 8:00 PM 4 Comments

In a hurry – this post disappeared – and here it is again

﻿ ﻿So with this post the comments from Randy and Kris disappeared too.

That must have happend while I was in a hurry.
posted by Carola at 7:27 PM 1 Comments 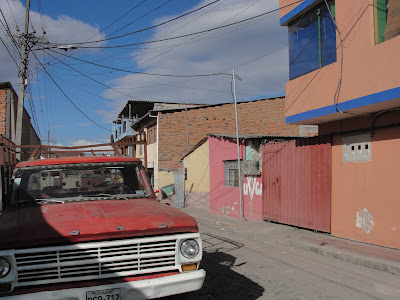 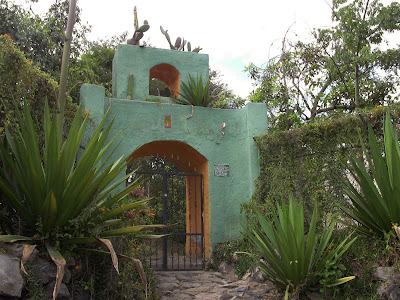 This is my ABC Wednesday, todays letter Q is for Quito.

Quito, the capital of Ecuador. 2,850 m (9,350 ft) high, close to the Equator with a perfect subtropical highland climate.
We spend there five weeks, in a small garden house, surrounded by avocado trees. (I have to surch for a photo).
posted by Carola at 10:55 PM 3 Comments

Linked to My World Tuesday
posted by Carola at 1:27 PM 3 Comments

In front of my window

UFO or just the tower

More information on this UFO-tower in my Friday post.

More participants from around the world at Tracys Shadow Shot Sunday﻿
posted by Carola at 8:23 AM 4 Comments

Is there an UFO in the refection? 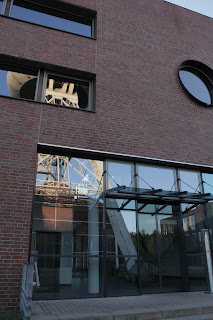 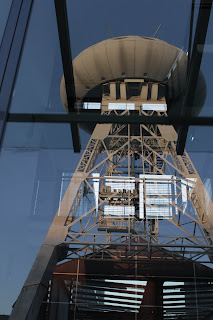 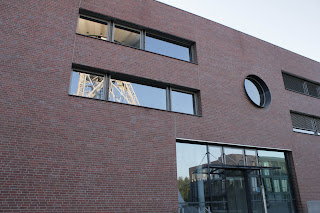 A former winding tower from the coal mine from 1922. Now the symbol from the Lüntec technology park. Mining stopped in 1992, the capsule on top was build in 1995 and the technolgy park opend as part of the structural change in the Ruhr district (German Ruhrgebiet).

Popularly called Colani-Ei, after the designer Luigi Colani and the egg-shape. Or it is called UFO. Seen from a distance it does actually look like.

Linked to Weekend Reflections. This great site is hosted by James.﻿ 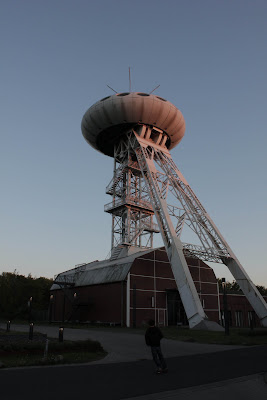 Again on our voyage down the Amazon on local mixed cargo-passenger ships. My last weeks Sky Watch Friday was from the same trip, but on a different boat.

For me one of the most beautiful places on earth.

For more Sky Watch from around the world, drop in to Sky Watch Friday.
posted by Carola at 9:12 PM 21 Comments

In the Ruhr Area 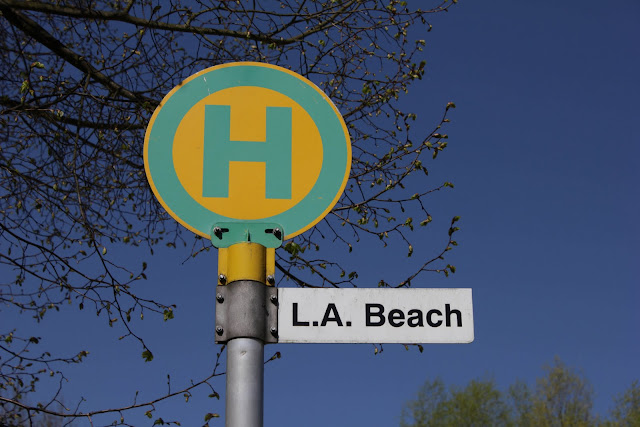 Panama or crossroads of the world 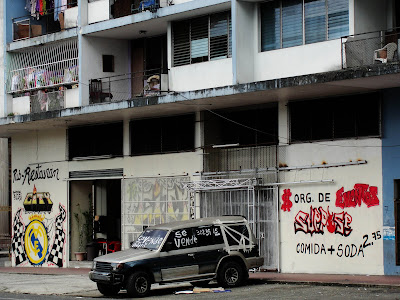 For ABC Wednesday I choose Panama for the letter P.

While traveling you have a lot of experiences. But this was something special.

We came here twice. First in 2001, with our tiny sailboat "WAL" on the Panama Canal westbound going under this bridge, sailing around the world.
Second with our car. This time driving down from Canada over the bridge.

That was the crossing of our two different long travels.
posted by Carola at 1:11 PM 3 Comments

I was thinking about naming this "typical german". For me this place around the corner is so typical.
posted by Carola at 10:41 PM 1 Comments